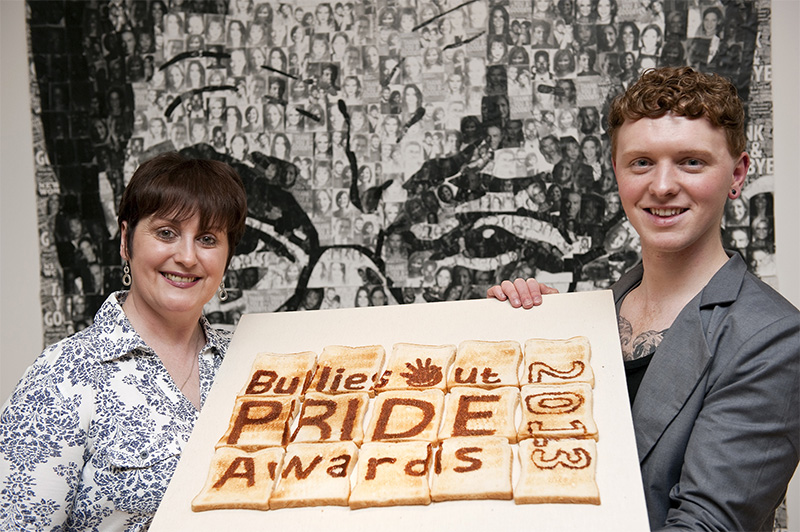 A young Welsh artist is standing up to bullies by showcasing his unusual portraits at an exhibition in Cardiff’s Queens Arcade this month.

Nathan Wyburn is an ambassador for Cardiff-based charity BulliesOut, which helps those affected by bullying, but is probably better known for his portrait of Michael McIntyre, and later Simon Cowell, in 2011’s Britain’s Got Talent.

During the ten day exhibition Nathan will be producing many works of art, including one of the BulliesOut logo made from his trademark marmite on toast. Using 35 slices of bread and half a jar of marmite, it is expected to take 2 hours to make and will be approximately A2 size.

The fine art graduate, 23, from Abergavenny, studied art throughout school but it was three years ago that he began using his creativity to produce his unusual masterpieces.

And it has helped him react positively to his difficulties as a youngster.

“I was bullied throughout most of secondary school and made to feel worthless,” he said.

“My art is something that I can be good at, and confident in myself, knowing that I’m not as worthless as the bullies tried to make out. I’d like to say to them, look at me now!”

Nathan specialises mostly in creating iconic celebrity portraits and “Pop Culture” imagery with non-traditional mediums such as food – such as Marmite on toast, ketchup, sugar and chocolate – along with other everyday items including newspapers, soil, candles, toothpaste and fake tan.

He recently created the face of Baroness Thatcher out of coal, and has previously produced an image of Rupert Murdoch using photos of phone hacking victims.

Since appearing on ITV’s Britain’s Got Talent, Nathan has appeared on many TV shows including Daybreak, Blue Peter and ITV News, as well as travelling the globe to exhibit in places such as Japan, Australia and the US.

The exhibition will also be launching the charity’s Pride Awards, which are being held in Cardiff City Stadium, Cardiff, on Saturday, June 8.

Organised by BulliesOut and accredited by ASDAN – the educational charity and awarding body – the awards offer opportunities for learners to achieve personal and social development through the achievement of awards and qualifications which enhance their self-esteem, their aspirations and their potential contribution to their community.

BulliesOut operates across the UK and provides much-needed help, support and information to individuals, schools, youth and community settings affected by bullying.

It works directly and indirectly with children and young people to help them lead anti-bullying campaigns in their schools and local communities, provides help and support to those who are bullied and works to re-educate and change the behaviour of those who bully.

BulliesOut directly addresses bullying, one of the core reasons affecting the emotional, social and academic well-being of young people.

Through interactive workshops and training programmes, the team of more than 25 volunteers focus on awareness, prevention, building empathy and positive peer relationships, all of which are crucial in creating a nurturing environment in which young people and staff can thrive.

Services include an online mentoring forum which enables individuals to access support; workshop and mentoring schemes provided for primary and secondary school children and young people as well as parents and professionals; establishing new pieces of research; supporting marketing, fundraising and administrative activities; and a Young Ambassadors Scheme which offers an opportunity for those as young as 9 to get involved in volunteering activities.

Linda James, BulliesOut founder and full-time chief executive, said: “We are thrilled to have Nathan as an ambassador for Bullies Out. By channelling his feelings into his artwork, Nathan has shown the world that he is far from ‘worthless’, as his bullies once said, but is a brilliant artist and a fantastic role model.

“We are pleased to have him on board.”

For more information please contact Caroline Hammond on 07739 761414 or by emailcaroline@wilkinsonpr.co.uk

For more information on sponsorship opportunities at the Bullies Out Pride Awards, please contact the event manager prideawards@bulliesout.com