Trolling has become the latest phenomenon to impact upon social media networking sites and is by far the most vicious and damaging to young people and adults alike.

What is a Troll?

A Troll is a term for a person, usually anonymous, who deliberately starts an argument or posts inflammatory or aggressive comments with the aim of provoking either an individual or a group into reacting.

The phrase was coined after a fishing term meaning that basically they (the troll) attach their bait (their comment) and wait for others to bite.

Sites such as Facebook, online forums, blogging sites and newspapers comments have all become a platform and a stage to bombard people with insults, provocations and insulting threatening language. Trolling takes place where others can see the comments made. If you receive abusive, aggressive or mean messages privately, that isn’t trolling – that’s bullying.

Trolls go to great lengths in making their messages as hurtful as they can so that the recipient of the messages that are concerned and afraid.  Trolls feed on attention and what they do ranges from clever pranks to constant harassment to violent threats. The difficulty is that most of the people who troll online send the messages anonymously and therefore makes it difficult to identify who the sender is. Trolls are ruining the Internet and in his article for ‘Time’, Joel Stein writes:

“They’ve been steadily upping their game. In 2011, trolls descended on Facebook memorial pages of recently deceased users to mock their deaths. In 2012, after feminist Anita Sarkeesian started a Kickstarter campaign to fund a series of YouTube videos chronicling misogyny in video games, she received bomb threats at speaking engagements, doxxing threats, rape threats and an unwanted starring role in a video game called Beat Up Anita Sarkeesian. In June of this year, Jonathan Weisman, the deputy Washington editor of the New York Times, quit Twitter, on which he had nearly 35,000 followers, after a barrage of anti-Semitic messages. At the end of July, feminist writer Jessica Valenti said she was leaving social media after receiving a rape threat against her daughter, who is 5 years old”.

Concern over internet vitriol is growing, but supporters of trolling argue it’s about mischief and freedom of speech. But for many, the ferocity and personal nature of the abuse verges on hate speech.  In its most extreme form, it is a criminal offence.

The impact of trolling shouldn’t be underestimated – it has greatly affected the mental health of those targeted, and in some cases has even caused those persecuted to want to take their own lives – Jesy Nelson recently spoke publicly in her BBC documentary about just how badly the trolls affected her mental health. Many trolls often target high profile individuals with a large social media following in order to provoke reactions from their fans and followers.

Why do people Troll?

There are many reasons why people might troll online and it’s different from one troll to the next.

Most people troll others for either revenge, for attention seeking, for boredom and simply for personal amusement. For some, they could be hitting out at people who are successful,  happy, and enjoying their life because maybe the troll’s life isn’t like that. Others may troll because they’re insecure in themselves and they get a buzz out of being hurtful and negative towards someone else.

Many people believe anonymity is a protection against the hatred they spill online, but this is not necessarily the case. We all have a Digital Footprint and people have been excluded from education establishments, lost their jobs, their friends and have event been sent to prison for sending abuse online. Not only is it an awful thing to do, something that can destroy a person’s life, a person who engages in this type of online behaviour is risking their own future.

How can I proactively prevent being Trolled?

The internet is governed in the UK by the Communications Act 2003 and also covers messages sent by text, e-mails and mobile phone calls. Under Section 127 of the Act, it states that it is an offence to send messages that are ‘grossly offensive or of an indecent, obscene or menacing character.’ 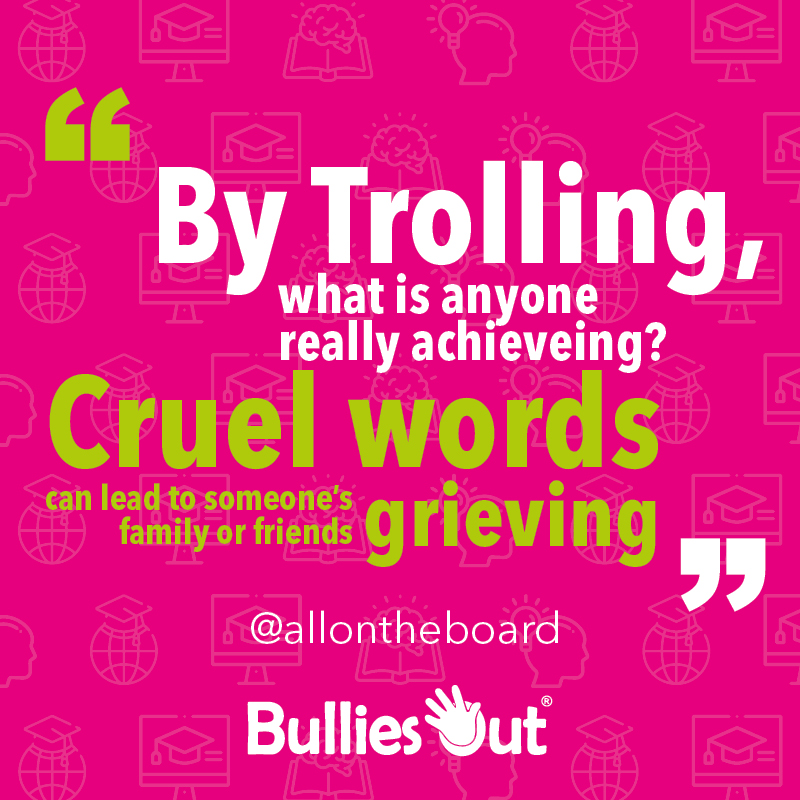 Fundraise for us! We have plenty of ideas as to ho